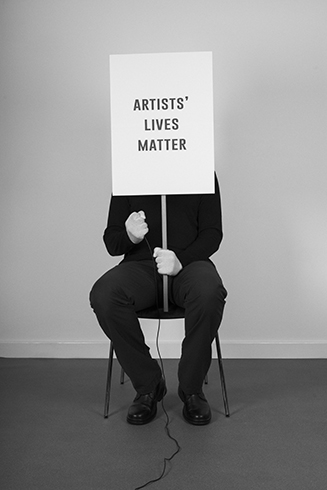 Karl Ohiri (b.1983, London) is a British-Nigerian artist currently working between London and Lagos. His practice focuses on the Human Condition and explores the social functions of art by merging two inseparable strands of one(s) exsistence.

On-going autobiographical narratives based on family, identity and heritage. Personal experiences form the starting point for the work, where the politics of the self is used as a way to challenge the boundaries between the private and the public - inviting his audience to explore the in-between personal spaces that shape his practice, thoughts, and sense of self.

Many of his projects start as written proposals, where the proposal is used as a tool to take creative initiative and collaborate with art spaces and institutions. Drawing on his studies in visual culture; semiotics, appropriation and recontextualisation are used conceptually within his art, incorporating the use of photography, video, text and everyday objects.

His works have been showcased internationally in venues and exhibitions that include the Venice Biennial, Reattu Museum, Southbank Centre, The Courtauld Gallery, Tate Britain and the National Portrait Gallery London. His works are held in the public collections of the Arts Council England, Welcome Collection and The Rencontres d' Arles Collection.

Alongside his artistic practice he is the instigator and guardian of the Lagos Studio Archives. The largest film archive in Europe of Lagos studio photography from the 1970s to post millenium. The project aims to broaden the visual and cultural representations of Nigerian studio photography through the salvaged archives of a generation of photographers that discarded their negatives due to a shift from analogue to digital photography.


2020 - Go On Being So, group show, Newlyn Gallery and The Exchange, Cornwall, UK

2019 - Lagos Biennial, How to Build a Lagoon with Just a Bottle of Wine?, Lagos, Nigeria

2019 - Personal Structures - Identities - in the context of the 58th Venice Biennale, Venice, Italy

2018 - There Not There, group show, Courtauld Gallery, London, UK

2018 - Artist talk, in conversation with Harrieliveart, for the students of Kokola Art School, Finland

2013 - The Mega City and the Non-City, LagosPhoto Festival, Lagos, Nigeria

2011 – Hybrid Lives: Locating The Self and The Other, Stephen Lawrence Gallery, London, UK

Founded in 1946 to acquire works on behlaf of the nation the collection operates as a 'museum withouout walls'. It serves as the largest loan collection of modern and contemporary British art in the world, and includes important examples by all the UK's most prominent artists.

The photography collections of 'Les Rencontres d' Arles' comprises of photographic works from all over the world created by leading practitioners of photography. Every year new works are collected, preserved and shared with the public through curated exhibitions.

A public museum and library founded by Sir Henry Solomon Welcome. The museum showcases artefacts from around the world that explore the connections between science, medicine and art. The collection contains more than 250,000 prints, drawings, paintings and works in other media dating from the 14th century to the present.

A portrait of the artist photographed by Diane Patrice hangs permanently at the University of Greenwich. Inducted for his contribution to the Arts the portrait forms part of an annual collection that celebrates outstanding Alumni. Notable figures include scientists, writers, musicians and sports personalities.